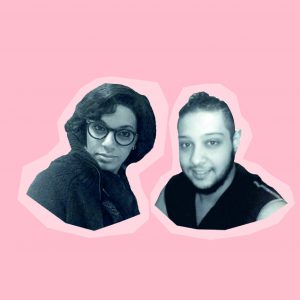 Against a backdrop of quasi-consistent repression since 2013, Eman Al-Helw and Hossam Ahmed were arrested on 28 February 2019, along with 70 other people, during mass arrest operations. This was in response to criticisms of the government’s action on social networks and calls to protest the train accident at Ramses station in Cairo that left 22 people dead and 43 injured on 27th February 2019.

Eman, an actress, and Hossam, a transgender man, are both human rights activists, particularly for the rights of members of the LGBTIQ+ community. They were initially detained for four days in an unknown location before being brought before the state security prosecutor on March 4, 2019 based upon charges of supporting a terrorist organisation and using personal Facebook accounts to commit crimes punishable by law. On 3rd March 2020, the prosecutor again decided to extend the detention of Eman Al-Helw and Hossam Ahmed for a further 45 days.

In a gross violation of their physical and mental integrity, prison authorities on the 18th March 2019, forced Eman and Hossam to undergo a thorough physical examination, including of their genitals, by hospital doctors against their will and without any medical grounds. Besides, Hossam had a medical certificate issued by a hospital describing his situation and the hormone therapy he is undergoing as part of his transition process. It also stated that he had not yet undergone any operation. Consequently, this examination was totally unjustified. Hossam has also been denied access to his hormone therapy by the Egyptian authorities since his arrest.

Eman Al-Helw and Hossam Ahmed are also constantly subjected to various forms of physical harassment and psychological abuse. Since their first day of detention, they have been held in an underground cell in a police station without access to the outside or sunlight. Because of their gender identity/sexual orientation, the Egyptian authorities consider that they cannot mix with the “normal population” and have refused to transfer them to a prison.

What can you do ?
PRAY FOR THEM! PRAY FOR THEIR RELEASE! WRITE TO THEM!

To write to them