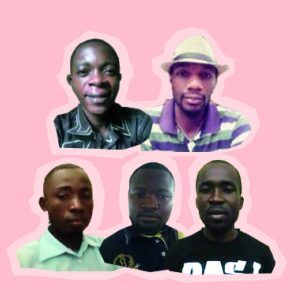 Between 23 November 2019 and 22 December 2019, five young Congolese civil society activists were arrested on charges of “jeopardising the national security of the State”, an extremely vague charge regularly used by the regime to imprison its dissidents. They have been arbitrarily detained in Brazzaville prison since then for peacefully exercising their freedom of expression.

These young activists had long been targeted by the Congolese authorities for their communication on social networks, including messages of support for the electoral campaign of Andrea Ngombet – an activist and opponent of Denis Sassou Nguesso’s regime.

It would seem that the five activists, who have been denied provisional freedom, appeared before an investigating judge on 30 January, which is beyond the legally stipulated time limit under Congolese law.

ACAT-France is concerned about the detention conditions of these five young people, in a country where torture and ill-treatment are commonplace, particularly against those suspected of criticising the current regime. With the 2021 presidential elections approaching – in which President Denis Sassou Nguesso, aged 76, will once again be a candidate – their detention on charges of “jeopardising State security” appears to be a negative signal to Congolese civil society, especially its youth, and to all those who would like to use their freedom of expression to peacefully criticise the authorities in power and/or to promote opposition movements and parties.

Denis Sassou Nguesso’s regime – which has been in power for more than 35 years – is indeed rather afraid that Congolese youth will mobilize itself and collaborate to demand a change of political power in the country. As a result, the regime is extremely vigilant of initiatives that are considered a threat and any opposition stance that could lead the youth to adhere to anti-regime sentiment. The judicial system is particularly employed to silence Denis Sassou Nguesso’s political opponents. Dozens of activists and opponents, convicted or charged with “inciting public disorder” and “undermining internal security”, are currently languishing in prison, some have been for several years, simply for exercising their right to freedom of expression and peaceful demonstration. Many of them have had to endure torture while in police custody.

To write to them