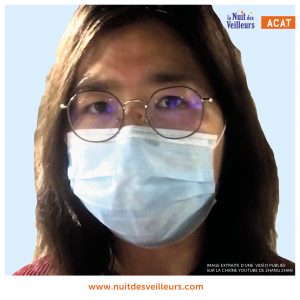 Lawyer and “citizen journalist“, Zhang Zhan was one of the first to report on the health situation in Wuhan, China. Her commitment to the truth led her to prison led her to prison where she continues her struggle.

A former lawyer, Zhang Zhan is a citizen journalist who is used to expressing herself actively via social networks, on politics and human rights issues in China.

In February 2020, she went to Wuhan a few days after the city was placed under a ban, to investigate a comment from an Internet user that he had been left alone to face death. Along with a few others, including Fan Bing and Chen Qiushi, also supported by ACATFrance, she filmed bedridden patients in a hospital corridor in Wuhan. Her images give a rare glimpse of the sanitary conditions in the first city in the world to be affected by the coronavirus, far from the image that the official media tried to impose. She is also seen standing up to a police officer ordering her to stop filming. “I have the right to monitor what the State does”, she answered calmly to the man who tried to snatch her cell phone.

In May 2020, Zhang Zhan was arrested and sentenced in late December to four years in prison for “provoking public disorder”. In provisional detention, from June 2020, she started a hunger strike to protest against her detention and claim her innocence. Her jailers retaliated with a nasogastric probe. Her hands were tied to prevent her from removing it and her health is deteriorating according to her lawyer who was able to visit.

On December 18, 2020, the People’s Court of the Pudong New District Court informed Zhang Zhan’s defense lawyer that her trial date was set for December 28. On that day, Zhang Zhan was wheeled into the courtroom courtroom in a wheelchair. According to her lawyer, Zhang Zhan is physically weak. In addition, she was forced to wear leg shackles and had her hands tied 24 hours a day for more than three months, as a punishment for being on hunger strike.

At her trial, Zhang Zhan was accused of using social media platforms to spread false information. Zhang Zhan was mainly reporting on the arrest of other independent journalists and the harassment suffered by families of victims.

Despite this, she remains combative and refuses to answer the judge who asks her to state her identity. After the verdict, she refused to appeal. “She thinks that the whole system as a whole is absurd,” says her lawyer who was able to visit her in mid-January.

“She does not want to compromise,” he said. She insists “that she has never been this determined”

To support her, To Pray for her, To write to her !

In order to write to her: