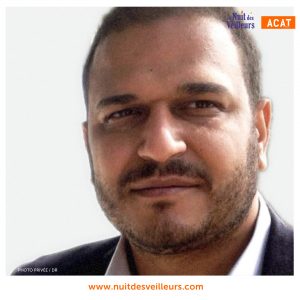 Since the 2011 revolution, Ramy Kamel has been defending the right to religious liberty as well as documenting human rights violations against the  community to which he belongs. Arrested during the fall of 2019, he is still in detention.

On November 23, 2019, Ramy Kamel was arrested at his home without warrant by 7 police officers dressed in plain clothes. His camera, his computer and his phone were seized. Known for denouncing discrimination and violence suffered by the Coptic community, Ramy was interrogated without the presence of his lawyer and was tortured. Transferred to Tora prison, his pre-trial detention was regularly extended. The State Security Prosecutor accused him of “participating in a terrorist group and its financing, spreading false information and disturbing public order through social media”.

His arrest was in retaliation for his human rights work and his involvement with the United Nations. In April 2019, 7 months before his arrest, Ramy Kamel had indeed reported on the discrimination suffered by Copts since the arrival of President Al-Sissi to power. At the end of November 2020, he was to participate in the Forum on Minority Issues organized in Geneva by the United Nations. His arrest occurred days before his departure for Geneva. Ramy Kamel was tortured twice by national security agents. Since then, he has been placed in solitary confinement.

For UN experts, this amounts to torture and demonstrates the arbitrary nature of his detention. This detention is extended every 45 days, while his last face-to-face hearing took place on December 2, 2019.

On 23rd August, Kamel’s sister was able to visit him for 20 minutes, during which she was able to see that her brother had lost about a third of his weight. He told her that he was in a very bad state of mental health, due to his prolonged isolation. He also told her that he suffered from repeated asthma attacks and that he had not received proper medical care for 3 months.

November 23, 2020 marked the first anniversary of Ramy Kamel’s detention. On January 17, 2021, the Cairo Criminal Court court in Cairo renewed his detention for 45 days. In view of his health condition, Ramy Kamel is particularly at risk of contracting COVID-19. On April 15, 2021, 43 organizations and organizations and individuals wrote a letter to President of the United States Joseph Biden to give attention to the very troubling case of Ramy Kamel.

To support him, To pray for him, To write to him !

In order to write to him: