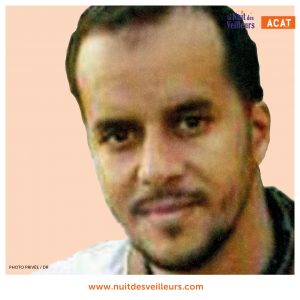 Mohamed Lamine Haddi is a Sahrawi activist who participated in the protests of the Gdeim Izik camp in 2010, in connection with the social and economic situation of the Sahrawis. Arrested with others, following the dismantling of the camp, he was sentenced in 2013 to 25 years of imprisonment. His confession was extracted from him under torture.

He is imprisoned far from his family, making it very difficult to contact them, even though this is an internationally recognized right.  The detention conditions of Sahrawi prisoners are terrible.

Mohamed Lamine Haddi is in solitary confinement and is only allowed out of his cell for one hour. In December 2020, the prison director ordered that all of his personal effects be confiscated. He has not been permitted to receive a visit from his lawyer since March 2020, nor has he been able to see his family.

Mohamed Lamine Haddi began a hunger strike on January 17, 2021 to draw attention to his conditions of detention in the prison of Tiflet II. He has in fact told his lawyer that he would rather die than continue like this. Since February 22, telephone calls with his family have been forbidden.

Because of the conditions of his detention, Mohamed Lamine is now suffering from partial paralysis on his right side, memory loss and pain in his left hand.Despite this, he is denied access to a doctor.

Since February 25, 2021, his family has not heard from him any more news of him.

Since March 1st the right to visits has been once again restored. His mother went to prison where he is detained, 1200 km away from her home, but she was not allowed to see him. Since then, she has been waiting there and was even detained by the police for a few hours on 3rd March.

To Support him, Pray for him, Write to him !

In order to write to him; please use: