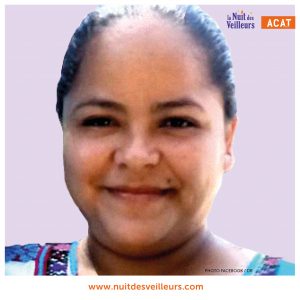 Kenia Ines Fernandez Montalvan has been a human rights defender for a long time.

She is the coordinator of the Colectivo Libertario Zapata Vive, a farmers’ movement that defends the right to land and promotes different forms of peaceful resistance against the neoliberal economic models imposed by the Mexican state.

Between June and October 2020, she was arrested 3 times on false charges in order to turn into criminal charges, her peaceful and legitimate demands and activities in favor of the peasant communities. Since October 2020, she has been detained in deplorable conditions that threaten her health whilst the public prosecutor’s office multiplies cases against her.

On June 6th, Kenia Ines Fernandez Montalvan was arrested while peacefully demonstrating to demand the release of political prisoners in the state of Guerrero. She was placed in custody until June 11. She appeared before a judge of the judicial review court of Ecatepec and was placed on probation.

On October 18, 2020, she was again arrested by unidentified police officers and incarcerated on the charge of robbery with violence. On October 25, 2020, a new arrest warrant for the arrest of Kenia Inés Hernández, this time federal in nature, was requested and accepted for the alleged crime of “attacks on the street”. The human rights’ defender was supposed to be released on probation on October 25, but she was re-arrested at the Santiaguito Social  Center of Santiaguito, in Almoloya de Juarez Almoloya de Juarez, a few hours before her release. Several cases have been filed against her since her incarceration. On March 25 March 2021, Kenia and her lawyers were informed by the prosecutor’s office that a new investigation had been opened.

Since October 2020, she had been in pre-trial detention in a maximum security prison, the Centro Federal de Readaptación Social Femenil. On January 16, 2021, the prosecutor requested a 5 year imprisonment sentence against her, making  6 opened cases – proof of a real agenda against her, who only seems an indigenous woman committed  to a cause.

Today, it is her health that is most preoccupying. On April 1, 2021, Kenia Inés Hernández Montalván informed the judge of control of Acapulco that she was suffering from fever, headaches, stomach aches, chills and general body pains. general. The judge allegedly requested for information from the detention center about the living conditions of the defender.

Kenia Inés Hernández Montalván believes that the ailments she suffers are caused by the poor sanitary conditions of the detention center where she is imprisoned. there, she has to keep drinking water and eating food of poor quality and low nutritional value and this has been so since October2020.

A demonstration was held in Mexico City on March 18 March in front of the Federal Prosecutor’s office to demand her release, five months after her arrest. The practice of making unfounded allegations against human rights human rights defenders, aims at intimidating those who work for the promotion and protection of human rights in Mexico.

In order to write to her