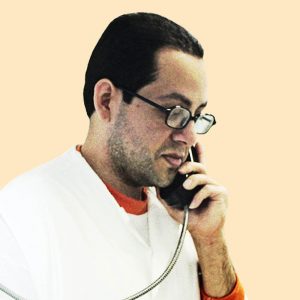 Rodolfo, or “Rudy,” a 40-year-old of Latin-American origin, has been on death row in Texas since September 2005.

Rodolfo was sentenced for the murder of six people during a drug theft in January 2003.  Texas authorities knew that he was not at the scene of the crime and that he was not the one responsible for the shooting.  However, he owned guns that he had left with a friend and these guns were used to commit the homicides.  According to the “law of participants associated with a crime” (the law of parties) that still exists in Texas, owning the homicide weapons is enough to be sentenced to the death penalty.

Like others sentenced to death in Texas, Rodolfo is subjected to extremely difficult conditions in detention that can be classified as torture.  He lives in a cell that is approximately 5 m2   He is only permitted to leave his cell for 2 hours a day, 5 days a week.

Two of these “outings” take place in the open air, inside a cage with a bucket of water.  The three other times outside of his cell occur inside the prison, in a cage in the hallways.  Before leaving his cell, he is strip-searched.  He also is not allowed to have any physical contact with his family.  All of his visitors must stay behind a glass window and talk with him through a telephone.

At least once every 90 days there is a lockdown, or solitary confinement that can last between 14 and 21 days, sometimes longer.  The cells are heavily searched.  He is not allowed to take walks and there is no laundry service.  Showers are very limited and there are no warm meals.

To write to Rodolfo
(in English or in Spanish) :