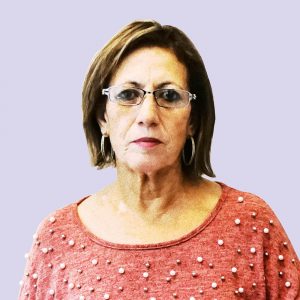 60-year-old María is the mother of Adrián Favela Márquez, a victim of enforced disappearance along with her friend Adriel Ávila Barrios since October 2, 2012 in Ciudad Juárez.  Without help from the authorities, María and her family tried to find those who had disappeared since the authorities’ investigation was not moving forward. The family’s investigation resulted in them being surveilled and intimidated by state agents, who were either directly or indirectly implicated in the disappearance.

Like all the loved ones of people who are missing, María has been subject to constant psychological torture, not knowing if Adrián was still alive and, if so, in what conditions.  She also feared for her own life and the lives of those who accompanied her in her daily struggle.

As a result of her courage and determination, she received the “Engel-du Tertre” prize in 2018 from the ACAT Foundation for human dignity.

Enforced disappearance means that someone is arrested or detained and deprived of all forms of independence by state agents.  The authorities refuse to recognize this deprivation of liberty or to disclose the whereabouts or location of the missing person.

Removed from the protection of the law and separated from society, missing people are at the mercy of their abductor, often tortured and constantly threatened with death.

What can you do ?
PRAY FOR HER! PRAY THAT SHE WILL FIND HER SON!

To write the following words to her:
« My thoughts are with you and I wish you strength and courage in this ordeal. »

To write to Maria :