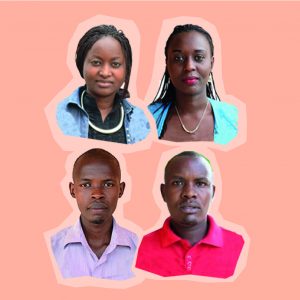 They are journalists for the independent media house known as Iwacu in Burundi. On 30 January 2020, the Bubanza high court sentenced them to serve a prison term of two and a half years and a fine of one million Burundian francs each (about 480 euros) for “making an impossible attempt to undermine the internal security of the State“. The trial, which lasted only two hours, did not meet the requirements of a fair trial, rendering the conviction null and void.

On 20th February 2020, UN experts vehemently criticised the conviction of journalists who simply sought to do their job of gathering information and publicly called for their release.

A month earlier, on 16th January 2020, the European Parliament had adopted a resolution on freedom of expression (2020/2502) in Burundi in which it called on “the Burundian authorities to drop the charges against these journalists and to release them immediately and unconditionally“.

These four journalists were arrested on October 22nd 2019 in Bubanza province without any legal basis as they were preparing to cover the violent incidents that had taken place the previous day involving the Burundi Defence Forces and members of the Red-Tabara rebel group.

The trial of the four Iwacu journalists is an example of the use of the judicial system by the ruling regime to stifle the freedom of expression of one of the last media outlets that manages to maintain its independence in Burundi despite continued pressure.

Since the beginning of the last major political crisis in Burundi, which began in April 2015 when President Pierre Nkurunziza decided to run for a third consecutive term in violation of the Arusha Peace Accords, many Burundian journalists have been targeted in the country.

After being questioned by the courts in December 2015, the founder and director of Iwacu, Antoine Kaburahe, fled the country fearing for his safety. Iwacu journalist Jean Bigirimana has been missing since 22 July 2016. He was reportedly arrested by agents of the National Intelligence Service (SNR) in the city of Bugarama. For having made public statements about her husband’s enforced disappearance, Bigirimana’s wife received threats and had to go into exile abroad. Many independent journalists and other Burundian human rights defenders have done the same in the last five years.

What can you do ?
PRAY FOR THEM! PRAY FOR THEIR RELEASE! WRITE TO THEM!

To write to them (in french)