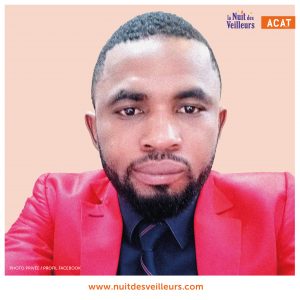 After more than two years in pre-trial detention, Paul Chouta was released on May 20, 2021, two days after his sentencing by the Mfoundi Court of First Instance to 23 months’ imprisonment. ACAT-France, which mobilized to denounce his abusive detention, welcomes his release.

Paul Chouta, one of the top three political bloggers in Cameroon, has been in prison since May 28, 2019 for a case of “defamation”[1]. Whereas the maximum sentence for such an offence under Cameroonian law is six months[2], he has now been in pre-trial detention for more than two years. His trial, which is still ongoing, is regularly adjourned. The authorities have arbitrarily denied him any freedom on bail.

Paul Chouta is also the manager of the digital platform “Le TGV de l’info” which has 189,000 subscribers. It encourages debates on controversial issues and disseminates information that the state media prefer to ignore. It regularly discusses topics related to the human rights situation in Cameroon.

Paul Chouta was arrested without a warrant[3], following a complaint for “defamation” filed by the French-Cameroonian author Calixthe Beyala[4]. He was taken into custody at the local police headquarters, he was denied a first request for bail on May 31, 2019.

He was then officially charged with “defamation, spreading false news and hate speech”. The next day, the charge of “hate speech” was dropped. He was transferred to Kondengui prison in Yaoundé to await trial.

Paul Chouta is accused of sharing on social media a video of French-cameroonian writer Calixte Beyala showing her in the midst of an altercation with a man in Douala. Calixthe Beyala claims that Paul Chouta and other unidentified individuals have made defamatory and slanderous statements about her personal life on social media and on the news page of “Le TGV de l’info”. Of the seven people involved in the video affair  on social media, only Paul Chouta is in custody.

Before his arrest, Paul Chouta regularly received anonymous threats and hateful comments on social media because of his critical reporting on the current regime and its president Paul Biya. During the presidential campaign in October 2018, when he supported the Movement for the Rebirth of Cameroon (MRC) which is the main opposition party, Paul Chouta was forced to move for security reasons.

The use of social media has skyrocketed in Cameroon in recent years. Bloggers, activists and private television stations active on social media have taken a share of the audience away from the state media[5]. As ICG notes in its report, Paul Chouta does not use hate speech. He is considered an activist close to the MRC.

His pre-trial detention is punishment disproportionate to the charges of defamation and dissemination of false information against him[6]. His continued detention amounts to a form of retaliation by the Cameroonian authorities against a journalist who has a strong following but is also very critical of the government in power.

You can congratulate him and support him again.

In order to write to him

[3] Article 122 (1) a) of the Code of Criminal Procedure states that: “The suspect must be immediately informed of the facts of which he is accused. He must be treated materially and morally with humanity.

To support him again and congratulate him, you can write to him

We will convey your messages