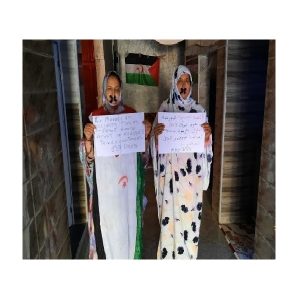 Human rights activist Sultana Khaya and her sister Luara have been regularly subjected to violence and sexual assault by the Moroccan security forces in a context of increasing attacks on Sahrawi women and men human rights defenders.

As the president of the League for the Defence of Human Rights and Against the Plundering of Natural Resources, Sultana Khaya has been a recurrent target of attacks by the Moroccan regime. She campaigns for the self-determination of the Saharawi people and their fundamental rights and is also a member of the Saharawi Forum against the Moroccan occupation (ISACOM). Since 19 November 2020, Sultana and her sister Luara have been under undue house arrest because of their commitment to the defence of Sahrawi rights. This decision was announced orally by the police chief without any judicial order and without any legal grounds. Since then, Moroccan security forces have been positioning themselves around their home and preventing the two sisters from going out.

Sultana Khaya and her sister have been subjected to harassment and sexual assault for several months, used as methods of terror to prevent them from carrying out their human rights work. Already on 15 November 2021, Sultana Khaya, her sister Luara, and her 80+ year old mother were sexually assaulted in their home. Similar assaults also took place on 8 November, 22 August, and 10 and 12 May 2021. On 5 December 2021, officers broke into their home, forced Sultana to inhale a substance that caused paralysis of her limbs, and injected her with an unknown liquid that caused her to lose several teeth, itch and swell. Then, for two hours, Sultana Khaya and her sister were raped and beaten. The officers also ransacked the house and rendered the water tank unusable.

On 16 March 2022, American volunteers were able to reach the Khaya family and break the blockade imposed by the Moroccan authorities. Relatives and friends of the family were subsequently able to visit them and bring a number of items to replace what had been destroyed by the multiple Moroccan raids on the home. Moroccan security forces continue to maintain a perimeter around the house and are working to dissuade those who would like to visit the Khaya family by threatening them with various types of reprisals. While the Khaya sisters can now go out around their house, they cannot cross the security perimeter imposed by the Moroccan forces, and thus remain under house arrest.

PRAY FOR THEIR RELEASE!