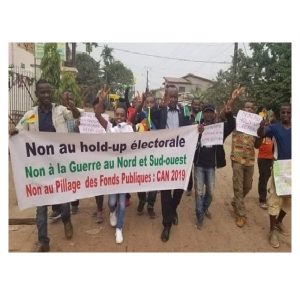 During the month of December in 2021, more than 80 activists and leaders of the Movement for the Rebirth of Cameroon (MRC), Cameroon’s main opposition party, were sentenced to terms ranging from six months to seven years in prison on charges of ” assembling to cause public disorder,” “insurrection” and “rebellion. The opponents, who were arrested in September 2020 for peacefully demonstrating against the way the upcoming regional elections were being organized, were tried by military courts in Yaoundé and Douala. Neither were they allowed to defend themselves freely nor were they given an independent and impartial trial.

Among those sentenced to severe terms on December 27 and 28, 2021, were Olivier Bibou Nissack, spokesperson for the MRC president, Alain Fogué, first vice president of the MRC, Pascal Zamboue, coordinator of the MRC, and Mispa Awasum, president of the MRC women’s league, who were sentenced to seven years in prison. None of the defendants nor their lawyers were present in court at the time of the verdicts. In September 2021, the coalition of lawyers defending the 124 imprisoned MRC activists and leaders (more than 500 had been arrested by September 2020) indicated that they were withdrawing from the ongoing legal proceedings due to “the impossibility of access to fair trial and the lack of independence of the judges.

As of January 15, 2022, Amnesty International reported that there were 107 MRC supporters and members in detention in Yaoundé, Douala, Bafoussam, and Mfou, arrested for wanting to or taking part in the September 2020 demonstrations. Several MRC detainees described being subjected to torture and other forms of ill-treatment while in the custody of the Secretariat of State for Defense (SED) in Yaoundé

PRAY FOR THEIR LIBERATION!

WRITE TO SHOW YOUR SUPPORT FOR THEM!