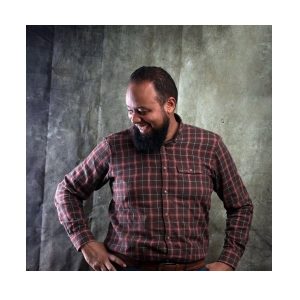 Mohamed El-Baker is a human rights lawyer, founder and director of the Adalah Centre for Rights and Freedoms, a position he has held since 2014. Arrested on 29 September 2019, he has spent the last two years in arbitrary detention under harsh conditions. On Monday 20 December 2021, Mohamed was sentenced to 4 years in prison during an unfair trial.

During a wave of unprecedented arrests in Egypt under President al-Sissi at the end of September 2019, Mohamed el-Baker was arrested on Sunday 29 September, while performing his duties as a lawyer assisting Alaa Abdel Fattah during a hearing on the premises of the State Security Prosecution Department.

Mohamed El-Baker was placed in pre-trial detention and prosecuted for participation in a terrorist group, financing a terrorist group and disseminating false information that threatens national security. For a year and a half, he was held in a small, poorly ventilated cell in Cairo’s notorious Tora prison. His conditions of detention are difficult: he is not allowed to leave his cell except for visits, and he is not allowed to have books or newspapers, or to listen to the radio. In addition, he has to make do with cardboard boxes as a makeshift mattress.

On 16 October 2021, Mohamed was again included in a new case with similar charges to the previous one. On 1 December 2021, several UN Special Rapporteurs called on the Egyptian authorities to release Mohamed and his two co-accused and condemned the systematic use of overly broad and vague definitions of terrorism, unfairly criminalising human rights defenders, journalists and other peaceful activists. On 20 December 2021, Mohamed was sentenced to 4 years in prison.

He is also placed on the “terrorist list” for five years, following a court decision of which he was not even aware in November 2020. The consequences of this decision are a freeze on his property and financial assets, a ban on travelling abroad and a prohibition from holding any public or official office, such as practising law, should he be released soon.

A Nubian minority and a 2001 law school graduate, Mohamed El-Baker volunteered to defend civilians before military courts after the outbreak of the 25 January 2011 revolution. In 2014, he was arrested for several months for “demonstrating without permission”. Together with other human rights activists and lawyers, he founded the Adalah Centre for Rights and Freedoms and became its director. In October 2020, he was awarded the 2020 Human Rights Prize of the Council of Bars and Law Societies of Europe (CCBE).

WRITE TO SHOW HIM YOUR SUPPORT!